We were lucky enough to gain four nights camping in the Moremi National Park in the Okavango Delta area of Botswana where unlike South Africa there are no fences around the camp sites. We had decided due to a lot of deep soft sand in the area to leave the Karavan outside and use the tent for the four nights. On our first night it was 1am and I was woken by some loud crashing noises and soon realised that we had a family of around twelve elephants coming through our campsite. I woke Pauline trying not to startle her in fear that she might  let out a scream! It was a full moon night with a clear sky so we were able to see them incredibly well. The first thing I did was to unzip the door of the tent and there a couple of metres away was a very big female elephant staring back at us. The family of elephants were all as close as 5 metres from the tent and because it was such a quiet place we could hear every sound they made, their munching on the leaves, a calf suckling on its mother, talking to each other in low deep rumbles, belching and the most loud sustained farts I have ever heard! After a while some of the elephants decided to have a Nanna nap and they just lay down on their sides and went to sleep right in our campsite. We could here their long deep breathing coming from deep down in their lungs and an occasional snore. I must say you do feel incredibly vulnerable when you are in a tent with twelve elephants stomping around outside at 1am! They eventually left us to try to get our hearts rates down low enough to get back to sleep but instead two Hyenas started with their high pitched haunting screams making it even more difficult to get back to sleep. We were up the next morning at 6.30am to inspect the footprints, large piles of natural fertiliser and broken branches when silently, back they came wandering slowly through the campsite back to where they had come from but this time they kept a wary distance from us. We feel so incredibly lucky and privileged to witness this and these are the type of experiences money just can’t buy, it’s all just sheer luck being in the right place at the right time!🐘🐘🐘🐘🐘🐘🐘🐘🐘. 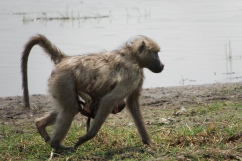 The next morning we left early to see what we could find while driving through the myriad of tracks, not at all well sign posted. The main tracks have some sign posts, the minor tracks have no sign posts and the seasonal tracks are just a maze! We spent so much time lost but just kept driving until we found a way out. There are quite a number of what are called Mobile Camps which are used by private companies who bring tourists in on mobile safaris where they stay in very basic camps and move on every couple of days to new sites. We thought this was a great idea because it meant that the Overland trucks didn’t clog up the National Park campsites leaving room for us! Moremi National Park is a part of the Okavango Delta which is best described by saying that it all starts in the mountains of Angola where the rains start running down through the Caprivi into Botswana which is very flat. The water tends to then fan out and eventually becomes fingers of lush greenery running down amongst  the arid dry land so the contrast is quite amazing. We could be driving through the dry arid country where you would think nothing could survive to all of a sudden come across an amazingly lush area of lagoons full of wildlife. We stopped under a big Sausage tree to have a coffee mid morning because again here in the Moremi you can leave your vehicle at any time which was special. We started off again and just a few hundred metres on we were lucky enough to come across three White Rhino dozing under a tree. Not more than 25 metres away two young blokes had pulled up and were having salads for lunch while watching the Rhino! We also noticed that at least one of the Rhino had an ankle bracelet and all off them had had their horns cut off, we presume in an effort to protect them from poachers. 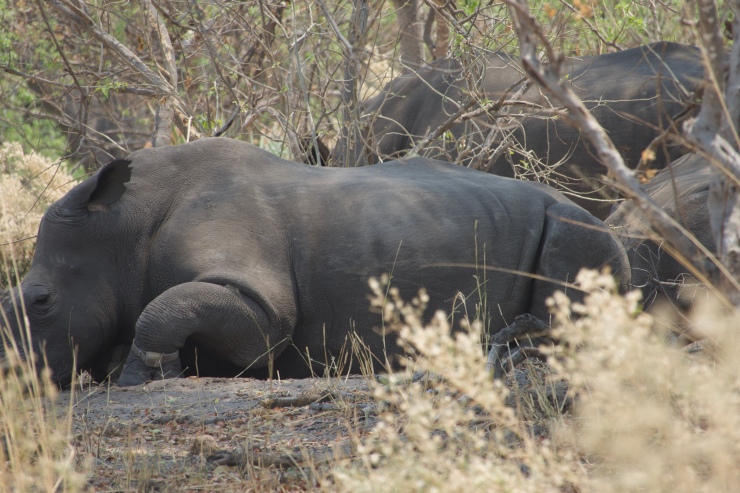 We were also lucky enough to come across two pairs of Leopard on seperate occasions. One of these pair had managed to snare an Impala and we were quite amazed to see just how far they had managed to get the Impala up into the tree to prevent their lunch from being stolen by Lion or Hyena. Both Leopard sightings we realised had been in Sausage trees, the same trees we always looked for to have coffee or lunch under! 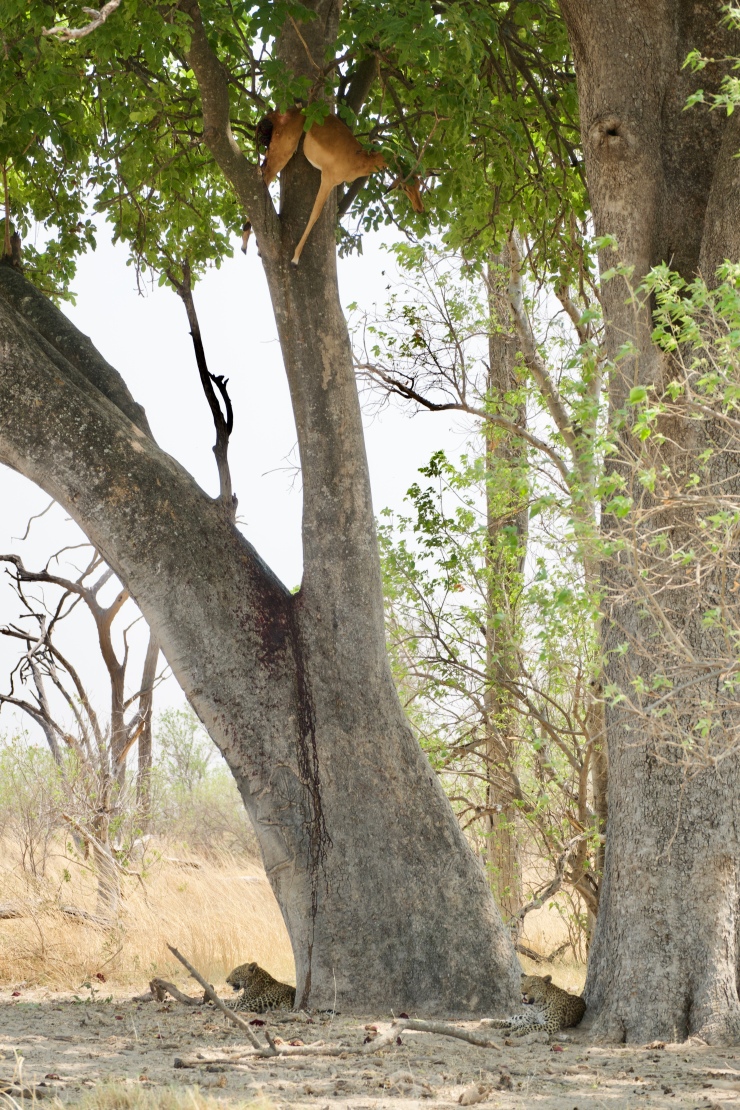 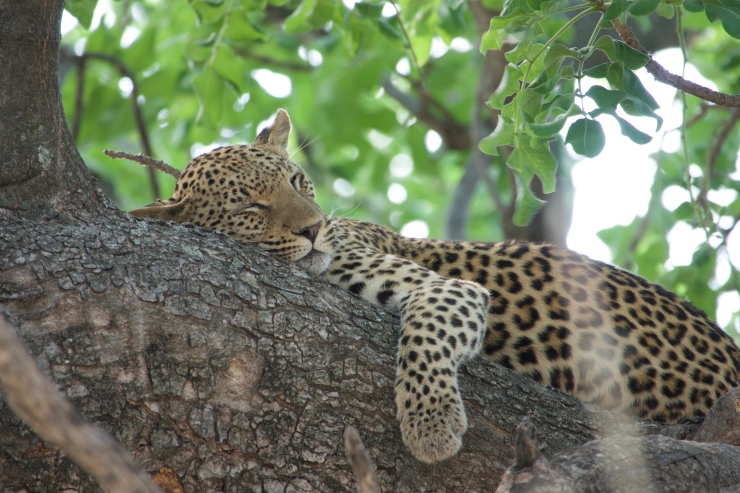 On our drives through the Moremi we came across many rivers and some had rudimentary bridges made from poles and some of these also had a water crossing spot. I was opting to take the water crossings and had been successful until at one I managed to get off line and sank into some really soft sand on the passenger side. We were stuck fast with water starting to come in but luckily there was a tree that we could use to winch ourselves out with and with daily temperatures of 39c the Land Cruiser dried out very quickly! We decide to do a boat trip in two different locations and both were a great experience where we witnessed elephants standing in the rivers eating the lush grass, ferns and water plants along the banks. We also saw lots of different birds, Water Monitors, Water Buck and 100’s of Buffalo.

Our first boat trip was on impulse when we came across a boat launch area and a couple from New Zealand Pearce and Colleen were just about to go out and asked if we wanted to join them. They were a great couple and we enjoyed a coffee and chat with them back at their camp afterwards. They too had had a mishap in crossing a river but had to wait for help in the form of another traveler to come along and tow them out. In the process of crossing the river Pearce had also broken all the blades of his engine fan so was waiting on a replacement to be sent from Maun. Well it’s all part of the adventure and those who take the bridges miss out on the fun of recovery!

Our second boat trip was out of our campsite of Third Bridge and we were very lucky to come across two huge male lions having a sleep under a tree on the banks of the river.

We really enjoyed our five days in the Moremi and it was just fabulous to see so many animals including all of the Big 5 and we were also very happy to know that we could also still really enjoy camping in a tent! On return to Maun we both thought it would be great to see the Okavango Delta from the air and so we went out to the airport to price the flight. To our surprise it was only $145 for a one hour flight and we jumped at the chance. It was a fantastic experience and gave us a much better perspective of how the Delta all works. The pilot was great and made lots of deviations to show us many different animals including a family of five Rhino, so many elephants, massive crocodiles and huge herds of Buffalo. At one stage the pilot did a low level flight over a section that was full of wildlife and none of them seemed to concerned about us so must be used to it.

Anyway all good things must come to an end and now we are off further North to the Chobe National Park and then we will cross in to Zambia to see the Victoria Falls once again.

15 thoughts on “Sleeping with the Elephants in the magnificent Moremi National Park. 🐘🐘🐘🐘🐘🐘🐘🐘”