We had stayed in Cape Town for two days and nights while we had some fine tuning done on the Land Cruiser before our journey North. We stayed at a private camp called African Overlanders which is a great place to meet other Overlanders and share with each other the knowledge we had gained. We had a great chat with Eva and Meg from Germany as well as the owners Duncan from England and Elli from Spain. The next morning we left reasonably early because we had a fair distance to travel to the town of Kamieskroon which is close to the Namaqua National Park. We passed through some amazing farming country that was just in amazing condition.

All went well and we pulled into the caravan park mid afternoon and it was a great place to stay with each site having its own covered Braai (BBQ) area and it was nice and private too. The next morning we left the van and Veronica’s truck  behind and all three of us piled into the Land Cruiser for a drive around the Namaqua National Park and in particular the Skilpad area where a carpet of Wildflowers come out around this time of year. We were perhaps a bit early with the majority of flowers being out in August, September but lucky for us they were out early this year.

We left the car at the park headquarters and did a walk through the flowers and were lucky enough to see some Springbok and a tortoise as well as many birds. 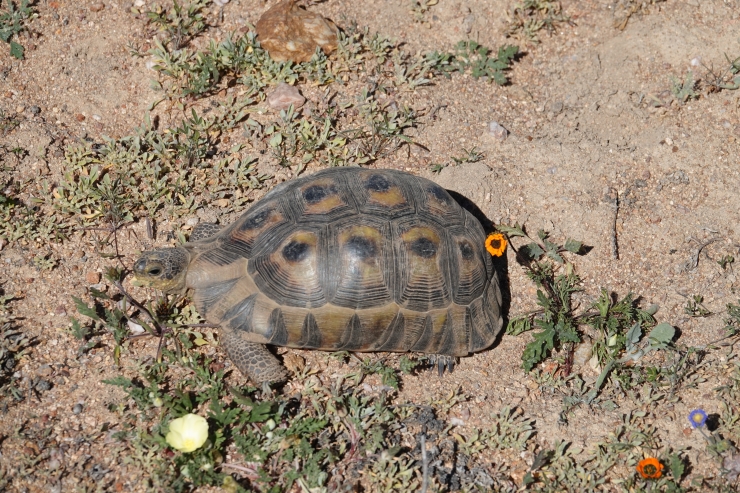 There were two Eucalyptus trees next to the headquarters building and they were full of Weaver birds building their nests out of gum leaves which kept us captivated for some time.

We then continued our drive through some very arid areas of the park and saw very little in the way of wildlife but we did stop and have a look at some very old mud brick houses that had at one stage been home to six farming families but were long ago abandoned.

1 thought on “A walk amongst the wildflowers of the Namaqualand.”