Pauline and I were up early and walked down on a very frosty cold morning to meet with Patrick the Service Manager at Maseru Toyota by 8.30am. He introduced us to Henry the mechanic who was assigned to the job and had already started work on it. He was going to work his way through the fuel system first and then go on from there. Looking at the large workshop I could see that it was immaculate and all the mechanics looked very smart in their uniforms. 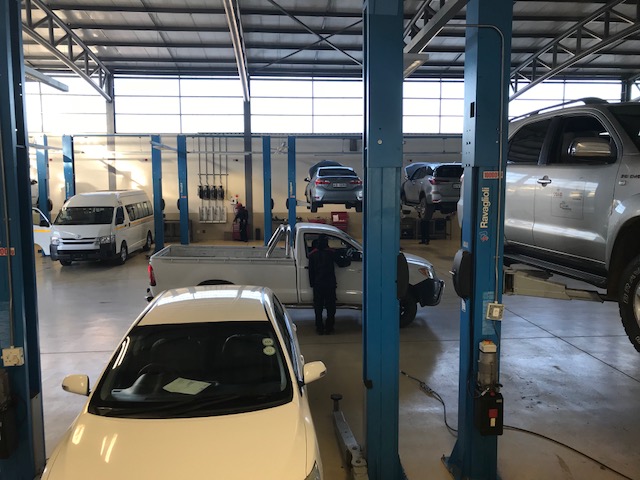 With time to kill we went off and did some shopping and then went back to the hotel to await the call from Henry, who was going to let us know what the problem was. At around lunchtime he rang with news that the DPF unit was fully blocked. In Australia we have a much more refined quality of diesel at around 15ppm Sulfur where in Africa you have two choices either 50ppm or 500ppm. I had filled with 50ppm but that is still way more than back in Australia. So the DPF was always going to struggle to do its job.

If you want to know what a DPF is and does have a look at this link.

Henry was going to see if he could order a replacement in but in the end was not able to get one in Africa because they have different standards here compared to Australia. So we had three choices

1. to attempt to clean it out and put it back on but it would more than likely block up again.

2. Get a new DPF freighted out from Australia but again that would more than likely block up as well or

3. Cut it completely out and weld a section of pipe in to join both ends.

So our decision in the end is to take Option 3 and we should have it back tomorrow sounding a bit more throaty and blowing a little more smoke! When we get back to Australia we will deal with a new DPF to comply with their standards.

So we hope to head back into the Lesotho mountains either tomorrow or Wednesday to pick up our Karavan in Mokhotlong and continue our magical holiday in Lesotho.

15 thoughts on “Our DPF needs a good dose of Laxatives!”