The day for departure came around all too quickly in the end. We left home in Trafalgar at 8.30am on the Queens birthday and spent the day with Jessica and her family in Melbourne. Our flight to Durban in South Africa involved three flights, the first was from Melbourne to Perth where we had a 3 hour stopover. The next was from Perth to Johannesburg in South Africa which was an hour late getting away and so consequently we missed our connection to Durban, so once again we had a three hour stopover. We landed in Durban to beautiful warm sunny weather and picked up our rental Corolla which was to be our transport for the next four days. Talk about being thrown in the deep end with the traffic in Durban, it was quite mad and no one seems to obey any of the road rules. We were driving down a four lane highway where there were no lines identifying the lanes which after having very little sleep in the last 48 hours certainly woke me up!

Our Airbnb house on The Bluff in Durban is very nice and comfortable but it did take us some time to get used to the high security fences and gates as well as the houses security beams and movement sensors. A fact of life in Africa.

So the latest on the vehicles is that the ship The Rosa arrived in Durban on Sunday the 10th of June but then had to sit at anchor outside the harbour until Tuesday night when she came alongside. The unloading started yesterday and unfortunately the container containing our vehicles won’t be delivered to the depot until today some time. This doesn’t leave enough time to get the Customs inspection booked in so it looks like being Monday before we get to see if they’re in one piece. We dicided to try and get some photos of the Rosa so we drove down towards the wharf. We came up to a gate post with security and managed to bluff our way through some how. We were as close as we could get and busy taking photos when all hell broke loose with security running from every where! Again with my big smile and a big “hello I’m from Australia” I managed to convince them that I would delete the photos and away we went at full speed!😂

Veronica arrived today and her truck is now expected to land on the 5th of July.

Sight seeing for a few days is what we will do! 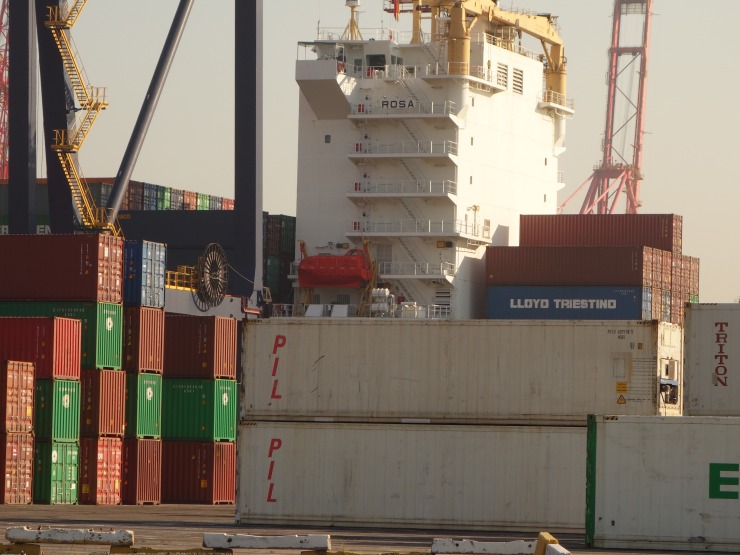 4 thoughts on “Rosa arrives and now we wait!😳”