The day to leave South Africa was upon us and we both agreed that we had had a fantastic 2 months looking around this beautiful country and also knowing that we would be back towards the of our African Adventure. But now it was time to have our second experience of a border crossing, this time from South Africa into Namibia and we had chosen a fairly quite border post to this. We left Upington reasonable early not knowing how long the process of crossing the border would take after our horrible experience at the Maseru border post. We decided that we should stop for a coffee on the side of the road around 10 kilometres out from the border crossing because we would need the caffeine to get us through we thought! The exit at the South African Border Post was relatively easy, no we didn’t have any firearms and no we don’t have more than 25 kilograms of meat each! Then it was a 17 kilometre drive to the Namimbian Border Post and again it was a surprisingly easy process and no standing in line at all. From there it was about a 2 hour drive to our overnight stay in the campground of the Fish River Canyon. We dropped the van off at the camp and then drove the 10 kilometres out to the main view point for canyon to see the sun go down but unfortunately it was not that spectacular a sunset and the sun actually sets right behind the canyon so photos were not very successful.

So the next morning we were up at 6.30am to be out at the canyon before sunrise but again we were out of luck because it was overcast and there was a slight drizzle which was disappointing but as I said to Pauline and Veronica we should be happy because very few people would see the canyon all misty and overcast! After sunrise we had breakfast and coffee that we had brought with us overlooking the canyon which was just great.

Then after that we drove to several other viewing areas and also did some great walks and of course took loads of photos. So after around four hours out there we headed back to the campsite and picked up the van for the short drive to Keetmanshoop but on the way dropped into a farm cafe to try their famous apple strudel and coffee which Theo in Upington had told us was a must do. He was right both were delicious and the owners were real characters. A walk around the carpark looking at all of the home made garden exhibits was fantastic. 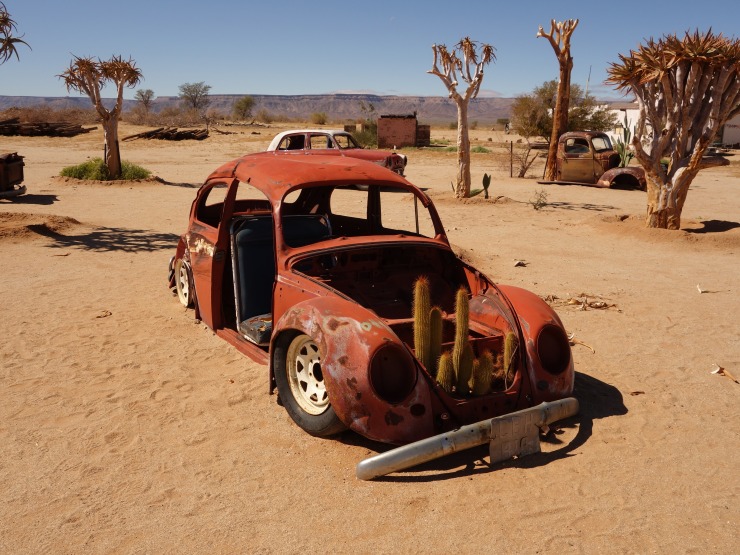 We stopped in Keetmanshoop to pick up telephone sim cards for our time in Namibia because it is extremely important to be able to get our daily grandchildren Snapchats! We stayed the night about 15 kilometres out of town at the Quiver Tree camp ground and the first thing we did after setting up was to take a walk through the Quiver Tree forest. There are around 250 trees in the forest ranging in age from very young to 2 to 3 centuries old and get there name from the bushmen traditionally used the branches to make their quivers. The forest was named a national monument on the 1st of June 1995.

The owner of the campground also has four orphaned cheetahs that he has raised and they again looked very well kept and happy. They have a 42 acre area all to themselves and are able to do some hunting but are also given some meat each day to supplement what they catch. The next morning we spent some time looking around the Giants Playground which is also a part of the farm that the campsite is on and it looked just like a giant had been playing with his building blocks.

From here we made the journey to a town called Aus but pronounced ouse where we stayed in a campsite on a farm called Klein-Aus Vista. It is a huge farm which also has a restaurant/bar, hotel rooms, Chalets, campsite and a hut and because it is such a big property it is all well spread out. For instance the chalets were 7 kilometres from the reception/restaurant and the camp site around 4 kilometres from the restaurant. The property has some wild horses living there and they graced us with a visit at the campsite and wild they were not!

On the second day here we went on a 13 kilometre walk through the hills which was fantastic but we were very happy to get to the end because it was a very mountainous walk.

That night there were no spare campsites so we splurged out and rented a cabin called Geister Schlucht all on it’s own and nestled in between two mountains. It only had solar power and composting toilets because of where it was but it was so quiet and peaceful.

Just down the road was a parking area for day hikers and around 4.30 we saw a car pull in and 4 people jump out and start off on a walk. There were 3 walks that started there, a 6.4 km, a 12.7 km and a 17.7 km. That night after our walk we were too tired to cook so Veronica drove us out to the restaurant 7 kilometres away and we enjoyed a scrumptious buffet which included oxtail stew! On the way back to the cabin at around 9pm we noticed that the hikers car was still in the carpark which was we thought quite odd so we went back to reception and reported this to them. After some checks it was discovered that they were not in there rooms and had not fronted up for dinner in the restaurant so were more than likely still up on the freezing cold mountain in the dark. We left them to organise a search party and went back to the cabin and spent quite a bit of time yelling out and trying to make contact with the hikers but we heard nothing. So when we turned in for bed we left all the lights on outside the cabin to give them some sort of reference point to return to. At around a quarter to one in the morning we heard them return to their car and drive off obviously very cold and hungry after their ordeal. The next morning I made contact with the family of Mum, Dad and two children aged about 10 and 12 years old and found that they had set off to do the 6.4 kilometre walk but ended up on the 17.7 kilometre walk by mistake. They were very lucky to have found their way out because the tracks are not well defined and at night it would have been very difficult to see where to go. I also don’t think that a search party was even organised which was very poor on the part of the owners.